Present and Prospects of Cell Therapy

At present cell therapy is considered to be a novel official direction in medicine, based on the use of the regenerative potential of adult stem cells for the treatment of a number of severe diseases, rehabilitation of patients after different injuries, struggle with the preterm signs of aging.

However, the roots of cell therapy originate many centuries ago, when the ancient physicians used bone marrow of animals to accelerate wounds healing and to treat burns, knowing nothing about stem cells, contained in it. Officially the world’s first bone marrow transplantation to treat leukemia was conducted in 1959 by the scientist Thomas Donnal, later a Nobel prize holder, and today only because of this method of treatment many forms of malignant blood diseases are supposed to be curable.

Update research showed that hematopoietic stem cells not only restore normal hematopoiesis instead of the pathological one in blood cancer patients, but also due to the production of various growth factors they have a strong regenerative effect, that permits to use them in the treatment of cardiovascular and neurological diseases, liver cirrhosis, diabetes mellitus and many others. In cardiology even a new direction appeared – cellular cardiomyoplasty, ie restoration of damaged myocardium by intracoronary or intravenous administration of stem cells.

Hematopoietic stem cell transplantation after mieloablation therapy is increasingly used in the treatment of solid tumors, especially breast cancer and germinal tumors in men and women.

Update studies have shown that cord blood transplantation is characterized by the same survival rates as the other stem cells sources, but have a lower risk of developing of the “graft-versus-host” syndrome, that allows to use it even in the case of incomplete histocompatibility. The benefits of cord blood also include a lower risk of infection (latent or oncogenic viruses) in allogeneic transplantations, and in addition to hematopoietic stem cells, umbilical cord blood is a rich source of endothelial progenitor cells of the unique profile, which give rise to new vessels.

According to the World Marrow Donor Association (WMDA) cord blood is used in every fifth case of the transplantation of hematopoietic stem cells instead of the bone marrow.

Thus, in 2012, the umbilical cord blood was used in 26% cases of the total number of 68 400 hematopoietic stem cells transplantations, perfomed in the world, whereas bone marrow was used in 25% transplants.

At the same time, in the countries with the developed cord blood banking, such as Japan and Singapore, the number of cord blood transplantations makes approximately 50% of the other sources of hematopoietic stem cells. And being considered earlier exclusively for pediatric use, at present time the tendency to increase of the number of cord blood transplants in adults, even in individuals older than 60 years, is noted worldwide. 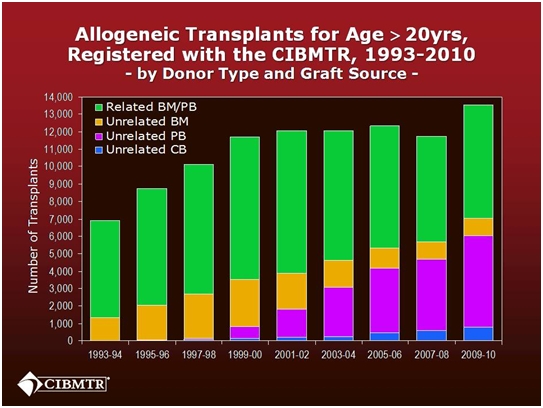 It is proved that umbilical cord blood is the preferred graft for the treatment of a number of congenital metabolic diseases, especially Hurler’s syndrome. Thus, the needs of practical health care in hematopoietic stem cells transplants and other cell cultures led to the establishment of the banks of cord blood, other cells and tissues, which in the last decade became an important component of health care systems in the most countries of the world.

In addition to hematopoietic stem cells, researchers are actively investigating and developing approaches for the clinical use of the other cell cultures, isolated from the umbilical cord blood, especially endothelial progenitor cells, which are promising for tissue engineering of blood vessels and heart valves.

Another important direction is the use of the umbilical cord blood lymphocytes, which are considered to be the new remedy of adoptive immunotherapy for the directed elimination of malignant cells and some pathogens.

The strategic direction of the update cell therapy includes gene therapy, based on the transplantation of stem cells cultures after certain genetic manipulations. The world’s first case of lentiviral gene therapy of ?-thalassemia, based on the transplantation of the patient’s autologous transfected bone marrow cells was held in 2007 and enabled to achieve high expression of the therapeutic gene of globin and independence of transfusions for 3 years as well as the significant improvement in quality of life of the patient. Prenatal gene therapy is also actively developing, implicating the delivery of genes to cells and tissues during early fetal development in order to correct genetic defects before they form a permanent damage to the tissue. Unlike postanatal gene therapy, prenatal manipulations can deliver genes to the larger population of stem cells and early gestational period allows the development of immune tolerance to transgenic protein, that enable postnatal gene therapy, if necessary.

Also, after the discovery of the scientists Shinya Yamanaka and John Gurdon in 2012 the possibility to reprogram adult stem cells into cells with induced pluripotency (iPS-cell), i.e. to translate them into a state similar to embryonic cells, for which they were awarded the Nobel Prize, today the first clinical study in the world on the application of iPS-cells for therapeutic purposes starts. So, in July 2013 the Ministry of Health of Japan gave a permission for the first such study on the treatment of retinal disorders.

The new trends in the banking of stem cells and other human tissues and cells actually, in addition to cord blood storage, include the peripheral blood stem cells banking as well as adipose tissue, placenta, cord tissue, endometrial stem cells and milk teeth.

The banking of autologous stem cells, obtained while the person is still young and healthy, is especially actively developing, as these cells may be used in the future for the treatment and revitalization goals and also may be useful to cope with premature signs of aging. It is known that not only the amount of stem cells reduce with age in humans, but the clonogenic capability of the cells also decreases. Thus, banking of the autologous stem cells to date equates to the “biological insurance”. In 2010, at the World Cord Blood Congress in Marseille (France), it was announced that the results of treatment of patients with the use of related cord blood is better compared to the unrelated allogeneic transplants. And among the currently available opportunities for conservation of stem cells from a variety of sources, the directed family umbilical cord blood banking is of special importance.

It should be mentioned that in the developed countries of the world, and in Ukraine, the service of the preservation of reproductive cells and tissues is also accessible.

Preservation of reproductive cells and tissues is indicated to children and cancer patients of reproductive age prior to chemotherapy and / or irradiation, which are accompanied by the risk of infertility development, to restore reproductive function in the future, as well as to women, who decided to postpone childbearing for the indefinite term. Today, worldwide, at least 25 children were born to women after retransplantation of the frozen autologous ovarian tissue.