The rapid development of biotechnologies and cell therapy led to the emergence of the whole new industry – the banking of cord blood and other tissues and cells, with the formation of the relevant legislation, new medical specialties and specialised enteprises. Currently, biotechnology as a new full-fledged branch of the medical industry, is developing along with the pharmaceutical industry, even competing with in many aspects, offering more efficient products for therapeutic purposes and a new generation of medical implants.

To date, the National Institute of Health ( USA) has more than 1,500 ongoing clinical trials on the efficacy of adult stem cells for the treatment of cancer, diabetes , cardiovascular and autoimmune diseases, and many others. At a recent summit on stem cells, which was held in New York, a recognized business analyst, president of the medical research company RRY Publications Robin Young said, that there are more than 34 million patients, who have indications to cell therapy, and experts predict that by 2017 , the U.S. biotechnology industry earns more than $ 8.5 billion, and the stem cells will be applied each year at least in 1,973 million medical procedures .

In USA alone over the past 30 years, one million patients have been treated with the autologous stem cells from different sources, and the American hospitals annually spend about $ 150 million on the purchase of cellular products and equipment for their production. At the same time, governments of developed countries actively fund research and innovations related to biotechnology . So, a few years ago, the Department of Defense has signed a contract with the company Osiris Therapeutics in Maryland on 224.7 million dollars for the drug of mesenchymal stem cells as a medical counter to nuclear terrorism and other possible emergencies. Following the approval of the cell preparation by the American Food and Drug Administration (FDA), the U.S. government plans to purchase at least 20,000 doses of the drug, and to store it frozen as a medical strategic reserve in different states of the country .

Among the sources of hematopoietic stem cells in 2010 the frequency of cord blood transplantations exceeded the number of those of the peripheral blood stem cells in patients younger than 20 years. At the same time, in Japan, about 50% of unrelated hematopoietic stem cell transplants are performed using the umbilical cord blood. A number of grants, issued in USA for the studies of umbilical cord blood, increased from 122 in 2008 to 167 in 2012, ie for almost 40% within five years. 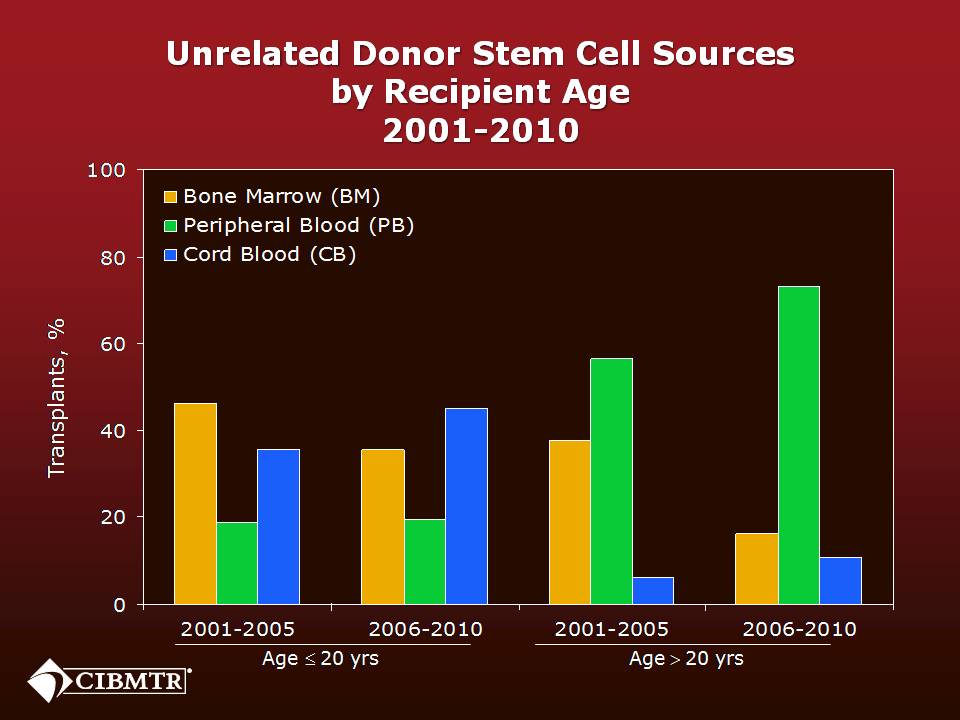 Currently, cord blood banks operate in almost every developed country, as well as in most developing countries. Family cord blood banks and public banks can be distinguished. The former offer personal storage of cord blood samples for families, who have ordered this service, which is treated like biological insurance – if necessary, the stored stem cells can be used for the treatment of a child, from whose umbilical cord it was collected, or other members of their family. In some US states the costs of the private storage of umbilical cord blood is excluded from for parents’ taxes. Also, if there are indications to the use of stem cells in the older child, the preservation of umbilical cord blood at birth of a younger baby in some countries of the world is covered by insurance companies.

Information on all of the samples from public banks are listed in the international registries of donors of hematopoietic stem cells and, when the graft of a specific phenotype is requested, the sample is transferred to the certain transplant center in the country or abroad. For example, about 20% of cord blood samples, harvested in the USA, are exported abroad. Public cord blood banks are established and actively operating in USA, Canada, France, Italy, Spain, Germany, Japan, China and other countries. 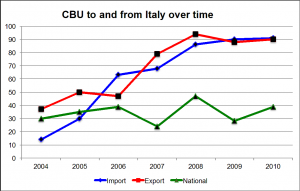 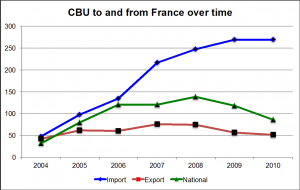 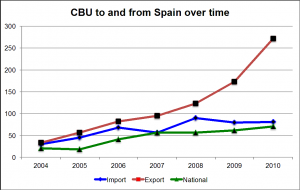 In Table 1 the data of the World Marrow Donor Association (WMDA), showing the statistics on the intercontinental exchange of the cord blood samples, is shown.

Table 1. Data on the intercontinental exchange of the cord blood samples

In 2013, the industry of cord blood banking is one of the fastest growing in the world. In 2005, there were only 23 actively operating cord blood banks, while in 2013 their number is more than 480. That is, only for the seven-year period the 21-fold increase (by 2100%) of the number of companies involved in the biotechnology industry is noted.

During 2012-2013, in the world the industry of cord blood banking increased 2-fold both due to the emergence of new players and services on the market and the growth of income from the existing operations. This rapid growth of the market is both an opportunity to make a profit, and has a risk of huge competition.

To date, in addition to cord blood stem cells banking, new directions are actively developing in the industry of human cells and tissues banking. They include the storage of the umbilical cord tissue, stem cells from the adipose tissue, amniotic fluid, milk teeth, endometriaum, etc. In 2012, a Japanese scientist Shinya Yamanaka and British researcher John Gurdon won the Nobel Prize for the discovery of the possibility of reprogramming adult stem cells into cells with induced pluripotency (iPS-cell), i.e. of translating them into a state similar to embryonic cells. In July 2013 the Japanese Ministry of Health gave a conditional green light for clinical trials using iPS-cells.

The services of the umbilical cord tissue stem cells preservation was first introduced in 2009 by the company HealthBanks Biotech in Taiwan. Also in 2009, this service was offered in Hong Kong by HealthBaby and Cryolife department, also based in Hong Kong. Currently the preservation of the umbilical cord tissue stem cells is offered by 9 banks in the USA, and every 3-4 months at least one new cryobank adds this service. A similar trend is observed in Europe, and a little less in the Middle East.

Also the adipose tissue as a rich and accessible source of mesenchymal stem cells attracts more and more attention of the physicians. The first attempts to identify stem cells from adipose tissue belong to the scientists Rodbell and Jones and are dated 1960. An important biological characteristics of adipose tissue stem cells is reduced expression of HLA antigens, and, accordingly, low immunogenicity. Stem cells of adipose tissue are being actively investigated in clinical trials for the treatment of cardiovascular diseases and injuries of the nervous system, mainly funded by companies that specialize on stromal-vascular fraction of adipose tissue banking and the production of equipment for this industry. Stromal-vascular fraction of adipose tissue is an attractive material for plastic and reconstructive surgery, because it has not only the characteristics of biofiller, but also performs endocrine, exocrine and paracrine functions. The results of long-term observation of the patients, who underwent reconstructive breast surgery using autologous adipose tissue are not yet available, but the literary data, published to date, demonstrate the safety of this approach.

Another one rich source of the stem cells and other valuable biologically active substances is placenta.

It was shown that placenta contains 10-fold higher number of hematopoietic stem cell than the cord blood. However, due to the complexity and high cost of isolation of stem cells from the placenta only a few cryobanks in the world offer the services of placental tissue preservation. In Ukraine, the Institute of Cell Therapy offers a service of the isolation and cryostorage of stem cells from the placenta, as well as production of exclusive products for medical and cosmetic purposes.

In January 2007, researchers at Wake Forest University (North Carolina, USA) under the direction of Dr. Anthony Atala of Harvard University reported the discovery of a new type of stem cells, which were found in amniotic fluid, possessing extremely high proliferative potential and the ability to multilineage differentiation. These cells are extremely attractive for tissue engineering purposes and prenatal correction of fetal anomalies. It is believed that amniotic fluid stem cells can be a potential replacement of human embryonic stem cells in research and therapy.

In the last five years in Europe, Asia and USA the cryobanks, specializing in the allocation and cryostorage of mesenchymal stem cells, derived from milk and wisdom teeth, appeared. However, the possibility of their clinical application is still being investigated only in experimental studies.

The presence of rare cells, having characteristics of somatic stem cells, was recently discovered in the endometrium. Therapeutic strategies for the use of these cells in the treatment of diseases are currently in preclinical and early clinical studies. In 2012, in USA the clinical trial (1-2 phase) on the evaluation of the safety and efficacy of endometrial stem cells in the treatment of critical limbs ischemia started. However, in USA, Europe, India a new service of endometrial stem cells preservation has already appeared.

High incidence of infertility in both sexes after chemotherapy and / or irradiation, a significant improvement in the effectiveness of cancer treatment and prolongation of life of cancer patients resulted in searches for the measures of effective fertility preservation in these patients and the development of one more direction in the field of biological material banking – reproductive cells and tissues storage.

Among European countries Ukraine may be proud of one of the most ancient traditions of human cells and tissues cryostorage. It was in Ukraine that in 1984 the first cord blood samples in Europe were preserved.

The first cord blood bank in Ukraine was established in 2003 in the Institute of Cell Therapy in Kiev, and meeting the requirements of the license conditions, it bacame also the first cryobank in the country, that received a license for the operation as a bank of umbilical cord blood, other human tissues and cells. The Institute of Cell Therapy also offers an exclusive service for the preservation of the placenta, as well as reproductive cells and tissues.

The vast experience of cellular products application is accumulated in the Center of Embryonal Tissues “Emcell.” Since 1994, the clinic performed more than 7,500 cell transplants.

Also in Ukraine, a recognized leader in the field of cells and tissue culturing, and the development of high-technological methods of different diseases treatment, using stem cells, is the Gusak Institute of Urgent and Reconstructive Surgery of the National Academy of Medical Sciences of Ukraine (Donetsk).

Due to the high incidence of blood cancer in Ukraine, a variety of HLA-phenotype of the population, complicating the search for the matching bone marrow donor, and the significant achievements of our scientists in the field of hematopoietic stem cells cryostorage, the next step in the development of cellular medicine in Ukraine should implicate the creation of the public cord blood bank, following the example of many developed countries.