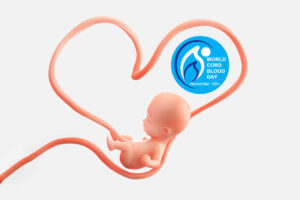 In order to raise public awareness on the biological value of umbilical cord blood and the possibility of its long-term storage, November 17 is a World Cord Blood Day.

Cord blood biobanking is supported by the most reputable international organizations, including the Red Cross, and almost all religious confessions in the world. In most U.S. states, maternity hospitals staff are required to inform women in labor about the possibility of storing umbilical cord blood in private biobanks for their own family or to donate it to public banks. The latter will transfer the processed donor umbilical cord blood to patients to whom it is suitable immunologically.

“Liquid gold of medicine”, “the greatest success story in the biotechnology”, “gift of life”, “gift of nature” this is not all how umbilical cord blood was called during 32 years of its successful use for the treatment of diseases! After all, the cellular composition of umbilical cord blood is more similar to bone marrow than peripheral blood, because it contains a large number of hematopoietic stem cells – CD34 +.

In Ukraine, the Association of Cryobanks annually supports World Cord Blood Day, and encourages expectant parents to use the services of only licensed umbilical cord blood banks (licensed by the Ministry of Health of Ukraine). An additional advantage for the biobank will also be the availability of international accreditations.